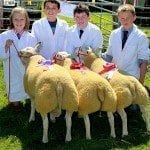 Steffan & Elin Rattray were helped by friends Hedd Dafydd and Dafydd Owen to the win the Group of Three Interbreed Championship at Llanilar Show on Saturday.     The group of three, comprising one ram lamb and two ewe lambs were all March born home-bred lambs from the Rattray flock, and had impressed the breed judge Mr Michael Owen in their respective classes before going on to win an impressive new trophy, presented by the Evans family of Nantbyr for the Best Group of Three Sheep at the Show.