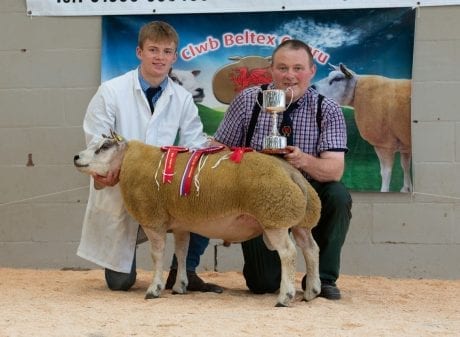 When Rob  saw the first Beltex sheep, in 1997,  he soon recognised the advantegeous qualities of this Belgian breed for meat production and since then, has used the Beltex ram as a terminal sire on the commercial flock.

Rattray’s Beltex flock was established to breed, what Rob considers to be the ideal terminal sire for the butchery trade.   In 2003, he paid his first visit to Belgium and discovered more about the Beltex sheep,and imported his first pure females.   These now form the nucleus of the flock and a number of the breeding ewes are descendants of these original imports.   The breed traits that attracted Rob to the Beltex include

Rob was invited by the Beltex Sheep Society to present a short video, demonstrating the fine qualities of the Beltex-x lamb cascasse in comparison to a non-Beltex crossbred commercial lamb and can be watched on the Beltex Sheep Society website www.beltex.co.uk.   The breed was primarily introduced to the farm to produce terminal sires for our own commercial flock and for the flocks of our lamb suppliers, thus ensuring the consistent supply of similar quality lamb carcasse for our trade, throughout the year..   However, as interest has developed and the flock has grown in number, progeny are annually sold as Shearling Rams and Shearling Ewes, at the Welsh Premier Sale in Welshpool, other Breed Society Sales and NSA sales.   Visitors are always welcome, by prior appointment, to view the flock on the farm.

Although Rob and the family take a keen interest in showing, commitment to the butchery business, restricts the showing circle to the Royal Welsh and the local show at Aberystwyth and Llanilar. On his debut as an exhibitor at the Royal Welsh Show in 2010, he was extremely proud to win the Male Beltex Championship with a home-bred two year old ram, Rattray’s Mr Urdd.   Success has continued over the years with Rattray’s Beltex winning Breed and Interbreed Championships at Aberystwyth and Llanilar Shows   “Mr Urdd”  has been widely used in our flock and has been influential in developing a quality carcasse in our stock.   Semen from Mr Urdd is available for sale.

Progeny from the Rattrays flock are consisently in the line-up at the Welsh Premier Sale. Rattrays Tyson, a shearling ram sired by Rattrays Mr Urdd, proudly stood Supreme Champion at the Welsh Beltex Club Sale in 2014.   At the 2015 sale, Rattrays Alligator, a ram lamb out of one of our home bred ewes, stood Reserve Male Champion.   In 2016, Our Shearling Ewe “Rattrays Amaryllis” took Reserve Female Champion whilst “Rattrays Bulldozer” stood 1st in the Ram Lamb class. In 2017 Rattrays Beethoven took 2nd place in the Shearling Ram class whilst a Rattrays Shearling Ewe achieved top price in the In-lamb sale. 2018 saw “Rattrays Cymro” take supreme Championship in the premier Sale whilst “Rattrays Cymraes” was 1st prize Yearling Ewe and reserve Champion at the In-Lamb Sale. For more on the Beltex sheep, see our gossip page or visit www.beltex.co.uk