Shearling Ewes and Rams will be available for sale

The Blue Texels were first introduced to the farm in 2005, when Rob returned from a visit to the continent with two in-lamb ewes for his children. Both were from the Dutch flock of 08480 and soon became family pets,  called “Lofty & Dizzy”. Today’s Blue Texel flock at Ffos y Fuwch are all direct descendants of these two original Dutch-bred ewes. Our first Blue Texel ram was a Pen-y-bec ram (PGA/06/3014M), who had won first prize at the 2006 Royal Welsh Show. He has been very influential in the flock, throwing stock with true marking, good shape, size and with a tight skin.   Semen from PGA/06/3014M is available for sale.    A major achievement for the flock was  winning the Blue Texel Group of Three class at the 2012 Royal Welsh Show with a home bred group of two shearling ewes and a shearling ram.  The following day, this trio went on to be shortlisted in the final five in the Interbreed Group of Sheep contest at the Show.  Another home-bred trio took the Interbreed Group Championship at Aberystwyth Show in 2015 out of a strong show of some 500 sheep.
Today’s stock ram is an imported ram from the BE4271 flock and is showing much promise throwing very much true to type stock.

To see the latest news from the Rattray flock visit our “Shop Gossip” page or for more on Blue Texels breed, please visit www.blue-texel-sheep.com 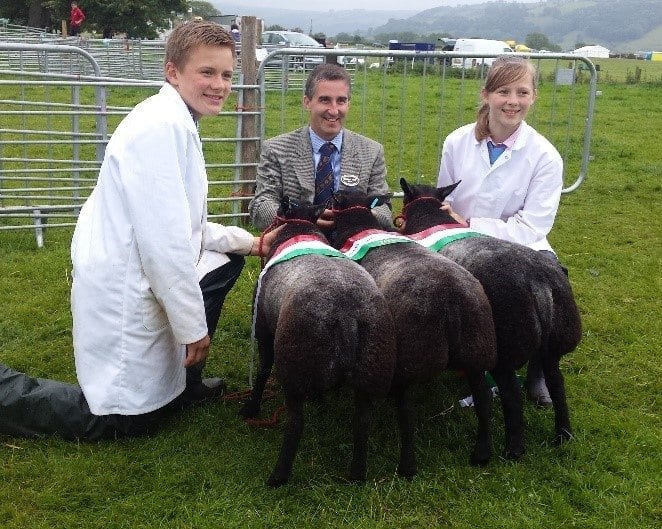